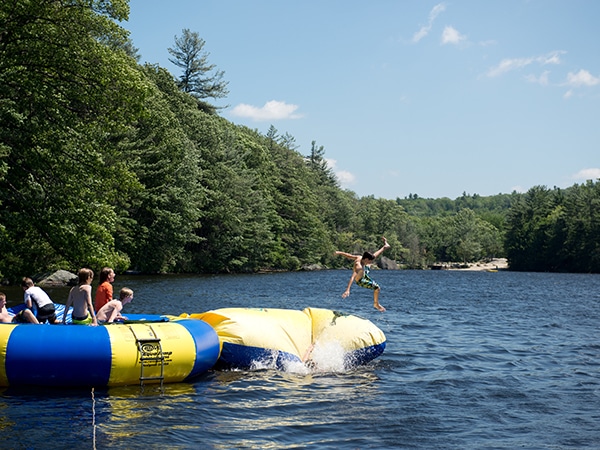 These last couple days of camp are some of the most special, and we’ve had some really incredible events going on the past couple of days. For example, yesterday was Super Happy Fun Day! Yes, it lived up to the hype. For one day we through the schedule out the window, and in the morning we run a gigantic free choice period where campers have one last chance to try anything they haven’t been able to yet. I saw some campers going down the zip-line for the very first time yesterday; better late than never!

The afternoon was dominated by our own Intergalactic Olympic games. Each team represented a planet in our solar system, and campers participated in all the classic Olympic sports like synchronized swimming, karaoke, and storytelling. The final event was a massive relay race out on the sports field, in which every camper on every team had the opportunity to participate.

Finally it was time for the Academy Awards, Windsor Mountain’s own version of the Oscars. Campers dressed up in their best formal wear, walked across a red carpet, were photographed by the paparazzi, and served dinner and horderves on trays carried by their counselors. After dinner we funneled into the dining hall to watch the awards show itself. Each of the departments gave a few awards to campers that had shown enthusiasm, responsibility, and improvement in their classes. The whole event was run by a couple of our LIT’s, introducing acts and making terrible puns.

It’s hard to believe that the last day of camp is nearly here, but there’s still a few more special events to go. We’ve got our annual Andy Upton road race this morning, finishing in a slip-and-slide and ice cream party. We’ve got our LIT graduation ceremony, our final campfire… the list goes on. Sometimes it feels like the last few weeks have flown by; other times, it feels like camp has been going on for years. Your kids will be very excited to see you on departure day, but it’s going to be really hard to say good-bye.

To those of you who will be able to make it up on Saturday, I’m excited to see you and have you join us for our Folk Festival. Our kids have been preparing musical acts to be performed for the families that assemble at camp on departure day. It’s a really special tradition, and if you can make it and stay to listen you will be giving these campers an incredible experience. See you soon.